On June 14, 1923, the first Girl Scout Troop in Miami-Dade County known as Alligator Troop 1 was founded in Coconut Grove by Mildred Emerson, A. E. Ozanne and Lillian B. Justinson.

The demand for Girl Scouting in Miami-Dade County continued to grow, and it was realized that a central organization had to be formed in order to hold together the Girl Scout Movement. Influential people were consulted which resulted in the Girl Scout Council of Dade County being granted a charter from Girl Scouts of the USA (GSUSA) in 1929. Judge Edith M. Atkinson, honorary Lifetime Member of Girl Scouts, was the initial founder of the council. Katherine Park, former Director of the Juliette Gordon Low Birthplace in Savannah, GA, was the first regional staff member who worked with Judge Atkinson to organize the council.

Our first annual Girl Scout Cookie Sale was held in 1934 with the proceeds used to operate summer programs, including day camps, with reserves going into a camp building fund. In 1935, the girls sold more than 48,000 cookies to earn money to send 30 girls to camp in Jacksonville for two weeks. In 1936, the first large-scale Summer Day Camp Program was inaugurated.

In 1945 the site for Camp Mahachee was purchased, and on June 3rd it was dedicated as the only tropical Girl Scout Camp and certified by GSUSA as the first Lou Henry Hoover Memorial Sanctuary and Forest in the USA.

Now the Girl Scout Council of Tropical Florida, Inc. is a diverse and vibrant member of the community, serving girls and adult volunteers. Together, our girls are working to make a lasting impact on our community and environment, while developing into strong, socially conscious leaders, already making our world a better place. 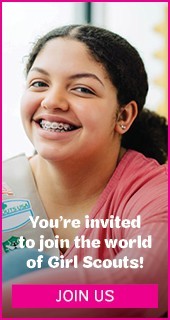